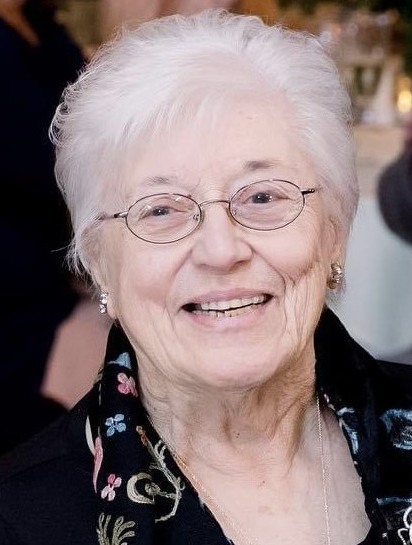 Kathleen Barbera Hinchey, seven months into her 95th year, passed away on May 18, 2022 in the warm embrace of her family.  She was born Caterina Teresa Barbera in Brooklyn, N.Y. on October 28, 1927 to Sicilian immigrants Carmelo Barbera and Teresa DiLucca Barbera.  An only child, Italian was Kathleen’s first language and she spoke no English when she entered the Brooklyn public schools where—like many Italians of that era—she endured unkind taunts and slurs from students, teachers and administrators.

Kathleen’s teen and early adult years provide a fascinating glimpse of the time and place where she lived.  During World War II she worked part-time at Western Union in Manhattan at a time when telegrams were not delivered, but rather were read over the phone by high school students hired specifically for that purpose.  After that, she worked as a switchboard operator for the New York Telephone Company; then for a major oil concern requiring (among other things) that she watch New York harbor through binoculars for the arrival of the company’s oil tankers; then for Racing Form, the premier publication of horse racing, at which time professional gamblers on the payroll advised her against playing the ponies; and then for RCA’s Recording Studios on East 23rd St. where she got to watch live radio broadcasts and recording sessions featuring top entertainers of the day.

After graduating from high school, Kathleen was one of three former students chosen to work at Brooklyn Polytechnic, one of the nation’s oldest engineering colleges.  There she met Francis Hinchey, an engineering student whom she married in November 1950 during the great “storm of the century” and with whom she moved to Hartford for his job at Pratt & Whitney Aircraft.  Kathleen continued to work a variety of jobs while raising six children:  Steven (Debbie), Terry (Nancy), Kevin, Patty (Don), Tom (Danette) and Sean (Lana), all of whom survive her.

During this time Kathleen also thrived creatively as a lead actress for over 15 years in the original Glastonbury Players, with additional appearances for the Wethersfield Players, the Windsor Jesters, Cue & Curtain in East Hartford, and the legendary Oval in the Grove in Farmington.  Moreover, theatrical competitions brought Kathleen onto the prestigious stages of the Wadsworth Atheneum and the Hartford Stage Company.  Among her fondest memories were rehearsing her lines at home with her children while folding the family laundry, and working with renowned local theater director, Valerian Yavorsky.

Since moving from East Hartford to Glastonbury in 1959, Kathleen was an active member of St. Augustine’s Roman Catholic Church.  She served on the board of the Altar Guild and on the Parish Council, was a lector at weekend masses, become a Eucharistic Minister, brought Holy Communion to shut-ins at home, and in 2008 was honored with the St. Joseph Medal which she received at a ceremony at St. Joseph Cathedral in Hartford.

Kathleen was also a volunteer for over 15 years at the South Glastonbury Public Library, one of the town’s historic gems staffed entirely by community volunteers.  She recalled this volunteer work as one of her most enjoyable experiences.

In Glastonbury Kathleen also enjoyed her two longest and most fulfilling jobs:  a temporary 4-week gig at Glastonbury Drug that lasted 14 years (with a wonderful boss, Jim Spencer), and 22 years as a travel agent at Holidays Unlimited (with another terrific boss, Sam Ridge) which enabled her to travel to Europe, Asia and Africa, and to help clients plan their trips.

A Mass of Christian Burial will be celebrated on Wednesday, May 25, 2022 at 10:00 am at Ss. Isidore and Maria Parish at St. Augustine Church, 55 Hopewell Rd., South Glastonbury. Burial will be in St. Augustine Cemetery. Friends may call on Tuesday, May 24, 2022 from 5:00 pm to 7:00 pm at Mulryan Funeral Home, 725 Hebron Ave., Glastonbury. Donations may be made to:  “St. Francis Foundation – Cancer Care at St. Francis Hospital” (https://www.saintfrancisdonor.com/giving/). For online condolences, please visit www.mulryafh.com.