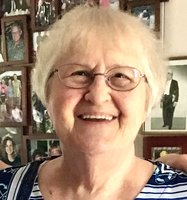 Carmen (LaPierre) Bruneau, a 58-year resident of Glastonbury, died on November 13, the day after her 89th birthday. Born in 1931 to Neil and Flavie (Soucie) LaPierre in Van Buren, Maine, Carmen was raised on a potato farm with her twelve brothers and sisters. She attended Husson College and moved to Connecticut at age 19. Carmen was employed by Pratt & Whitney Aircraft where she was introduced to Alcide Bruneau. On October 16, 1965 they were married and celebrated 39 years of marriage filled with love and dancing before Al’s death in 2004. They raised three children--Michele, Neil, and Mark. Carmen was a devout member of St. Paul’s Roman Catholic Church where over the years she founded the parish food bank, was a member of the women’s league, instructed RCIA, played bingo while Al called the numbers, and served as a Eucharistic Minister. In her later life, she was an active member of the Red Hat Ladies and AARP, and greatly enjoyed taking money from friends at their weekly card games. She never said no to a trip to the casino, and could coax a laugh out of anyone with her quick wit. She loved everybody and was well loved in return. Carmen was preceded in death by her parents Neil and Flavie, her husband Alcide, and her siblings Roger, Donald, Leopold, Leopoldine, Conrad, Geraldine, Euclid, Gerard, Sylvio, and Camille. She is survived by her sisters Jeanette Erickson and Carmella Soucy, her children Michele (Bruneau) Foote and her husband Jon of Colorado, Neil Bruneau and his wife Heather of Glastonbury, Mark Bruneau and his wife Julie of New Hampshire, and her three grandsons Hayden Foote and Chayne and Eric Bruneau. A wake will be held at Mulryan Funeral Home, 725 Hebron Ave, Glastonbury on Monday, November 16 from 4-6pm (masks and social distance will be required). A private funeral will be held at St. Paul Church. In lieu of flowers, donations can be made to your local food bank. For online condolences please visit www.mulryanfh.com.