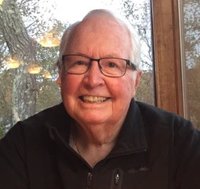 James Alton Millis, Sr., 89, passed away peacefully on November 10, 2020, in his home in East Hartford surrounded by loving family. James was born on August 26, 1931, in Newport, North Carolina to Lillian and William Millis. He was a Korean war veteran and a retired General Plant Manager at a food processing plant. He enjoyed spending time at Senior Moments in Tolland and made many friends there. James has gone on to be with his beloved wife, Lee, and their daughter, Kimberly, in heaven. He is survived by his daughter, Laura-Lee Turnquist, and her husband, Dave, his daughter, Nancy Brenner, and her husband, Greg, and his son, James Millis, Jr. James was like a second father to his niece, Lisa Wiedner and her husband, Daniel. James also leaves behind the second love of his life, Gloria Davila. He is survived by his grandchildren, David & Christopher Turnquist, Matthew, Stephen & Heather Shonty, and Daniel & Rachel Millis, ten great-grandchildren, and many nieces and nephews. Funeral services and burial will be private with a Celebration of Life to be announced at a later date.