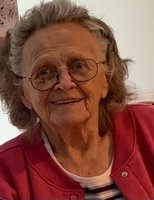 Eleanor Banta 93, beloved by all who knew her passed away on November 4, 2020 after a struggle with a stroke. She was the beloved wife of Charles Banta who died in November of 2009 . She was born in Plymouth, PA on August 24,1927 as the daughter of George and Teodora Strumski. She is predeceased by her parents and her brothers Steven and George. She is survived by her sons and daughters. James Boice and his wife Pamela of Lempster, NH; Susan Slyvia and her companion John Davis of Glastonbury, CT; Edward Boice and his companion Tammy Horan of Glastonbury, CT; and Darcy Karoll of Daytona Beach. FL. Eleanor and Charles moved their family from Pennsylvania to Connecticut in 1960 and settled in Glastonbury in 1963 were they became a part of the community. She had ten grandchildren Jason, Jesse, Jeffrey and Jackelyn Boice; Danielle Phelan and Kristine Hathaway; and Adam and Kylie Boice; and Daniel and Spencer Karoll. She also had five great grandchildren Eli, Jacob and Wyatt Boice and Sarah and Christopher Phelan along with several nieces and nephews in Pennsylvania. She was a stay at home mom until 1968 when she went to work at Pratt Whitney until she retired in 1995. She was a devote parishioner of St. Isidore and Maria Parish of St. Paul’s Church in Glastonbury, CT. She loved travelling with her husband Charles to his Air Force reunions. After Charles passed, she enjoyed attending lunches at the Glastonbury Community Center and taking many senior trips with her friends. She was the patriarch of her family and enjoyed having her children, grandchildren and great children for family gatherings and cookouts at her house. She enjoyed watching the UCONN Women’s basketball games the Boston Red Sox’s and was a diehard Dallas Cowboys fan. She used to bake the best pies and had a green thumb and everyone in Glastonbury admired her garden. With the help of her family she grew the best tomatoes and hot peppers in town. She will be missed by her family and her many friends in Glastonbury. Calling hours will be Sunday November 8 from 4pm to 6pm at the Mulryan Funeral Home, 725 Hebron Ave. in Glastonbury. A Mass of Christian Burial will be celebrated Monday November 9 at 9:30 am in Ss Isidore and Maria Parish at St. Paul Church, 2577 Main St., Glastonbury (face masks and social distance are required at both). In lieu of flowers the family requests donations be made to the American Heart Association, 5 Brookside Dr., Wallingford, CT. 06492. For online condolences please visit www.mulryanfh.com.