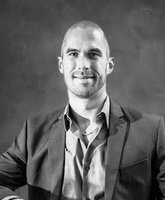 Jeffrey Thomas Gauches, 36, of Boston, Massachusetts, formerly of Glastonbury, CT, passed away unexpectedly in Boston. Jeff was a devoted son, who was predeceased by Joseph, his father and best friend, and is survived by his cherished mother, Kathleen Mary Gauches. Jeff was a champion swimmer, winning his first National competition at age 9, beating Michael Phelps at age 12 in both Free style and the Medley and continued on to receive National and Regional awards for several years thereafter. Athletic and competitive, after swimming, he turned his passion to skiing and snowboarding and the mountains became his “place of peace”. While attending Fisher College in Boston, Jeff worked in the capacity of Chief Operations Officer for Boston Nightlife Ventures (BNV) and continued after graduation. He was awarded the Fisher College “Outstanding Alumni” award along with winning notable accolades for various restaurants, and he was presented Zagat’s prestigious “30 Under 30” award in 2013. After 10 years in the hospitality field, he transitioned careers to become the Operations Manager with Integral Ingenuity LLC (ATC), an Events Production Company, responsible for staffing and setting up media events for major corporations along the East Coast. Jeff’s interests were wide and varied – skiing, photography, music and film and a fierce love of dogs, especially his three pugs, Molly (deceased), Lilly, Karma, and his rescue pit bull, Mira. His generous spirit was truly fulfilled when he could reach out and help family, friends, employees, acquaintances, or strangers. His philosophy for living his life was “family first” and “do what is right” for others. Jeff is survived by his loving partner, Stephanie Lane and will be missed deeply by his siblings, Lisa Marie Gauches, Heather Jo Rancourt, Brent Budrow Gauches and brother-in-law, Sean Rancourt, and sister-in-law Sandra Siso Gauches as well as his three wonderful nephews, Chase and Camden Rancourt and Jack Gauches. A mass of Christian Burial with burial in St. Augustine Cemetery will be private. There will be no calling hours. To live stream the mass visit this link http://yourstreamlive.com/events/1661192 password E233WN In lieu of flowers, donations can be made online to either the ASPCA, S.N.O.R.T (Short Nose Only Rescue Team for dogs), the PBRC (Pitbull Rescue Center), or the Lustgarten Foundation for Pancreatic Research, 415 Crossways Park Drive, Suite D, Woodbury, NY, 11797. For online condolences please visit www.mulryanfh.com.