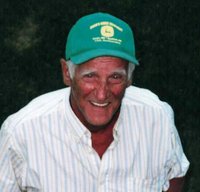 Aldee “Al” Poulin, 88, of Glastonbury, CT, passed away July 24, 2020 after a brief illness. Al was born in St. Simon, Quebec, Canada February 29, 1932. He was predeceased by his wife, Mildred Poulin of 50 years. His family came to America and settled in Maine when Al was just 14. His father taught him how to hunt fish and play ice hockey which became an important part of his life. He spent many years working alongside his father in the logging industry throughout northern Maine where he met the love of his life, Millie Poulin. Both families moved to Connecticut and married on August 27, 1955. In 1968, he made Glastonbury his home where he raised his family. He was a local contractor in Glastonbury for 40 years until his retirement. Once retired, every day he looked forward to getting breakfast with his favorite companion, Coco his chocolate lab where he would catch-up with friends. He treasured memories of his summer cottage on Mousam Lake in Maine where he spent time with his wife, children and grandchildren passing on his love of fishing, boating and swimming. He had a special bond with his granddaughters Sam and Ally; they spent every summer at the lake where he not only taught them how to fish but also many life lessons on patience, kindness and appreciation of the outdoors. Al was actively involved coaching little league baseball as well as his son Dave’s ice hockey league. Al was an avid Red Sox and Montreal Canadiens fan. He was an extraordinary man who always had a smile and kind word for everyone. He will be deeply missed by all who were lucky enough to have known him. He is survived by five sisters, Ange Gadbois of CT, Nancy Roder of OR, Lana McKinley of CA, Doris Hebert and Lizette Freeman of FL and two brothers Louis Poulin of CT and Jean Poulin of FL. He is also survived by his loving daughter Sandra Poulin and two loving sons, David Poulin and his wife Jody Poulin, and Michael Poulin all of CT, and his grandchildren, Samantha and Alyssa Bisi, Ryan and Jessica Poulin, Kyle and Tori Poulin and Chris Stewart. Memorial service will be held outdoors at the Holy Cross Cemetery in Glastonbury at 11am on July 31, 2020. Outdoor reception immediately following at the Glastonbury Elks Club. Due to COVID-19 attendees must wear face covering and social distance. In lieu of flowers, please send donations to Glastonbury Elks Club in Al’s memory.