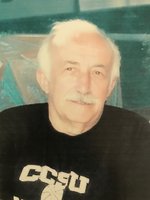 Daniel Henry Turgeon, Sr., 85, of Glastonbury, passed at home on May 21, 2020 after a courageous battle with cancer. “Frenchie”, “Danny” or “Pit”, leaves behind his wife of 63 years, Barbara (Smith) Turgeon, his five children, Nancy Anderson and her husband Mark of Lebanon, Karen Goulet of Newington, Patricia Radocchia of Colchester, Janine Turgeon of Marlborough, and Daniel Turgeon Jr and his wife Rebecca of Glastonbury. He also leaves behind nine grandchildren, Jessica Gieras, Jamie Goulet, Eric Anderson, Samantha, Michael, and Andrew Radocchia, Sara Rutkowski, and Kathleen and Benjamin Turgeon, along with 24 nieces and nephews, two great grandchildren, and several brothers/sisters-in-laws. Besides his parents, Dan was predeceased by his brothers Normand and Joseph Turgeon, and his sister Doris (Turgeon) Spain. Dan was born on January 24, 1935 in Hartford, son of the late Henry and Priscilla (Blanchette) Turgeon. He was raised in Newington where he worked the pony ring at the Pike Drive-In, later meeting and courting his wife Barbara at Thrifty Drugs. Dan spent much of his early married life in Newington where he raised his family while working as a machinist at Caval Tool. After moving to Glastonbury in 1991, Dan worked for several years as an inspector at LM Gill before retiring in 2002. In retirement he was a fixture at the Glastonbury Senior Center where he served as President or Vice President of the local AARP for several years and also made frequent appearances in the town news, often winning a best costume award or enjoying a senior event. He never put himself first his entire life, whatever you enjoyed doing was what he enjoyed doing that day. Family and spending time together was his passion regardless of the occasion. He knew what really mattered in life and mastered letting the unimportant things wait. When he did have free time, he loved to play canasta, build puzzles, or to travel on senior bus trips. He also enjoyed finding bargains he didn’t need and could be found most weekends at tag sales or flea markets. You’ve done your job here Dan/dad and it’s time to finally rest those eyes. We will meet again one day, and I know, “Thanks for the warning” and “ungawa”. Special thanks to the nurses from Hartford Hospice and the numerous aides who supported Dan over the final weeks of his life, allowing him to pass at home where he could be with his family to the end. In consideration of the current environment, no calling hours will be held. Family and friends can express their condolences at mulryanfh.com. A celebration of Dan’s life will be held at a future date.