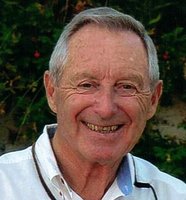 Clement F. Delahunt, Jr. , 90, passed away on May 14, 2020. The beloved husband of 62 years to Katherine (Onion) Delahunt. Clem was born in Providence, Rhode, Island, the son of the late Clement and Delia Rose (Burns) Delahunt. He was predeceased by his sister, Mary Naughton. After graduating Providence College in 1952 with a B.S. in Biology, he served as a medic in the US Army Medical Corps during the Korean War, where he later received the Combat Medical Badge. After his service in the Army, he was employed by the Upjohn Company for 35 years. During his 35 years of employment, he held numerous positions and was awarded Upjohn’s highest award, the W.E. Upjohn Award, before retiring in 1990 as the New England Government Affairs Manager. After retiring, he was a consultant for the Massachusetts Medical Society for 4 years. Clem had a strong sense of adventure and enjoyed the outdoors. He spent much of his life on the water and especially loved sailing. Summers were spent sailing with family and friends to Martha Vineyard, Nantucket, the Elizabeth Islands and Maine. During the winter months, he could be found skiing with family and friends in New England. His love for life, his smile and sense of humor will be missed by those who knew and loved him. Besides his wife, Katherine, he leaves behind his four children, his daughters; Mary Beth Merola, Nancy Basque and her husband John, Heather Kick and her husband Ronald. His son, Clement Delahunt and his wife Dawn. In addition, his eight grandchildren; Kevin Hildenbrandt, Kara Basque and her fiancé Mike, Larissa Bussiere and her husband Josh, Christopher Basque, Emma Kick, Morgan, Kelsey and Josh Delahunt and his great grandson, Landon Bussiere. Clem was a member of St. Augustine Church in South Glastonbury, CT. A private ceremony was held at the Holy Cross Cemetery in Glastonbury on May 18, 2020.